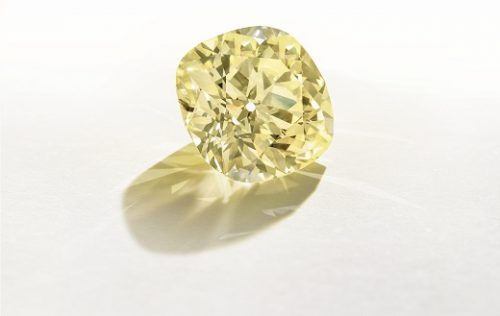 A diamond bought in memory of late diamantaire Sam Abram sold for more than double its high estimate at Christie’s Geneva auction Wednesday.

The cushion brilliant-cut, 118.05-carat, fancy-yellow, VS2-clarity stone fetched $7.1 million, or $60,000 per carat, at the Magnificent Jewels auction. The diamond, which was estimated at $2.5 million to $3.5 million, was purchased by Siba Corp. in honor of its former president. The company subsequently named it The Siba Diamond.

A necklace comprising 110 natural pearls achieved $5.8 million, well above its high estimate of $3.5 million. All other pearl pieces of note offered at the sale also exceeded their original estimates, Christie’s said.

Other notable lots included a pear-shaped, 75.61-carat emerald pendant necklace that belonged to the Grand Duchess Vladimir of Russia, which sold for $4.3 million, or $57,300 per carat. It was estimated at $2.3 million to $3.5 million.

“Natural pearls and jewels with noble provenance, such as the 75.61-carat emerald from Grand Duchess Vladimir of Russia, found much acclaim and sold for far above their presale estimates,” said Rahul Kadakia, Christie’s international head of jewelry. “Also of note was the 118-carat, fancy-yellow diamond that was purchased by Siba Corp. in honor of Sam Abram, a prominent figure in the jewelry world, who very sadly passed away last week.”